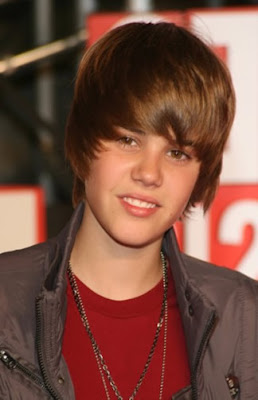 Justin Bieber is a Canadian pop-R&B singer. He was born on March 1, 1994 in London, Ontario and was raised in Stratford, Ontario, CANADA.

Justin Bieber’s mother, Pattie Mallette, was 18 years old when she became pregnant with her son. Mallette, who worked a series of low-paying office jobs, raised Justin Bieber as a single mother in low-income housing. However, Justin Bieber maintains contact with his father, Jeremy Bieber, who married another woman and had two children.

Justin Bieber’s paternal great-grandfather was a German immigrant to Canada.

During his childhood, Justin Bieber was interested in hockey, soccer, and chess; he often kept his musical aspirations to himself. As he grew, Bieber taught himself to play the piano, drums, guitar, and trumpet.

In early 2007, when he was 12, Justin Bieber sang Ne-Yo’s “So Sick” for a local singing competition in Stratford and placed second. Mallette posted a video of the performance on YouTube for their family and friends to see. She continued to upload videos of Bieber singing covers of various R&B songs, and Justin Bieber’s popularity on Youtube grew.

In 2008, Justin Bieber was discovered by Scooter Braun, who happened to come across Bieber’s videos on YouTube and later became his manager. Braun arranged for him to meet with Usher in Atlanta, Georgia, and Bieber was soon signed to Raymond Braun Media Group (RBMG), a joint venture between Braun and Usher, and then to a recording contract with Island Records offered by L.A. Reid.

His debut single, “One Time”, released worldwide in 2009, charted in the top 30 in over ten countries. His debut release, My World, followed on November 17, 2009, and was eventually certified platinum in the United States. Justin Bieber became the first artist to have seven songs from a debut album chart on the Billboard Hot 100.

His “My World 2.0″ was released on March 23, 2010 and has since received similar success; it debuted at number one and within the top ten of several countries and was certified platinum in the United States.
Posted by my freak and cool world at 9:57 PM